The fashion for swimming and sunbathing in shorts for most young men can end in the future deplorably!

Mankind lived for millions of years in southern latitudes, our ancestors went naked - no clothes were needed, it was warm. Naturally, the human body has adapted to interact with the sun, getting the maximum benefit from this interaction - the sun's rays (their UV part) takes part in the biosynthesis of chemical compounds that are important for the body (especially growing) - vitamins, enzymes, hormones.

Only in the course of the last millennia has mankind become inhabited by in the colder latitudes. In these latitudes, the solar energy received by man has sharply decreased. It took clothes to keep warm. Man has violated the natural interaction with the sun worked out over the course of evolution (in the most remote latitudes, the sun does not exist for half a year!). Many diseases - colds, endocrine, hormonal and infectious enhancement, was the result of a violation of this interaction. Even psychic - a syndrome of winter (in the west called “Christmas”) depression, is a consequence of a lack of sunlight. Especially they suffer in the far north.

Have you ever wondered why the masculine ovaries Nature or the God are taken out of the body?

Where did the fashion of the last decade go - swim and sunbathe in shorts?

After all, before on the beach, they were almost all swimming trunks? And even indecent as it was - sunbathing and swimming in shorts (shorts). And everything is very simple - the business of producing underwear. To increase sales, it was necessary to promote a new idol, a new fashion. Calvin Klein - American fashion designer, resting in Bermuda in the early 90s, attended a concert by third-rate rock singer Harry Midlows on the beach. This singer (and the whole band) performed in colorful shorts. This idea (beach and shorts - from there and the name - Bermuda shorts) appealed to Calvin Klein, and he began to unwind it. In the collection of clothes for the summer of 1992 for the first time beach shorts were presented. So this manner - to sunbathe and swim in shorts, caught on, first in America, then in Australia, and by the end of the 90s swept Europe. And how to be found, in the end I got to us.

Why are so many fans in this fashion?

The first reason is that shorts visually cover men's “dignity” more (and for every man, especially a young one, this is a “sick” question - the majority consider that his “virtues” do not have those parameters to be admired).

The second reason - no longer need to be shy of pubic hair, crawling out from under the bottoms. Instead of keeping an eye on your body, it's easier to cover it from view.

The third reason is simple imitation. Ask the majority of young people sunbathing and bathing in shorts why he is wearing shorts - the answer will be the following: “it is fashionable” ... And imitating fashion, many young men bathe not in special bathing shorts, but as such use shorts and even cowards (little families for the simple)! And many do not even suspect that there is a classification (division) of shorts according to their belonging - for the beach, for the street, for boxing, etc. And they can walk around the city in swimming shorts! What is the difference between swimming shorts and everyday shorts? Shorts for bathing bright colors, do not have pockets (may have a small pocket - a bag on the bottom), and have an intimate lining inside. 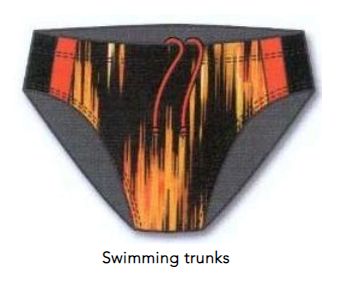 And the producers of shorts made a clever advertising “move” - they announced that only “gays” wear swimming trunks on the beach! And after all, many believed it! It turns out that all the older generation who were on the beach in swimming trunks - gay ... Absurd, and only.

So, how to properly dress while swimming and sunbathing?

- sunbathing, it is best to minimize the parts of the body covered with clothes, and if there is a possibility, then it is best to sunbathe naked. In this case, the body does not undergo temperature imbalance at all. And the whole body has the same smooth color without white bald spots. It turned out that tan also normalizes and increases sexual stamina in men and even a light tan makes a person more sexually attractive in the eyes of the opposite sex!

- swimming, no matter what - swimming trunks or shorts, in any case not to leave them on the body wet (what many young people sin with, and in addition, it is absurd to wear under shorts also melts or underwear). Be sure to remove wet clothes after swimming! (more detailed we will make here).

Such a poorly treatable male disease, like prostatitis, which a few decades ago was the lot of 60-year-olds and older, these days, are “younger” and every second 40-year-old man suffers in one form or another. . There are several reasons for this, but one of them is the exposure of male "dignity" to an imbalance of temperatures. And the current generation of young men further aggravates this imbalance. But until the thunder (in our case, prostatitis) struck, none of the young people seriously think about it. But when it does, then ...

Here is what Professor N.P. Alekseev writes in his book “ON HARM OF CLOTHING AND ABOUT DETECTION” - “The male sex glands are not found inside the body, like women, but outside in a special leather bag with numerous folds. This scrotum sac, performs the function of a radiator, keeping its contents at lower temperatures than those that take place in our body. Moreover, nature has created an automatic lift scrotum control mechanism. When the ambient temperature rises, it descends, moving away from the body, and, conversely, rises up close to the body when lowered.

All motorists know that by closing the radiator, they risk overheating the engine. But to the same people, already as men, it absolutely does not occur to them that, putting on their underpants, they not only restrain their movements, but also block the access of cooling air to the natural radiator. In this case, the violation of potency, infertility and hemorrhoids are the smallest problems of their health.

In the recent years bestselling book “Breathing Gymnastics Strelnikova” (M., Metaphor, 2002), the famous doctor, laureate of the Academy of Natural Sciences M. Schetinin writes: “Now most young people wear panties, tight-fitting penis and scrotum. The testicles are thus in a half-depressed state, which contributes to stagnation in the spermatic cords (the vas deferens, their arteries and veins, the venous plexus, and the testicular artery and lymphatic vessels of the testicle are pinched).

In addition, a large number of sweat and sebaceous glands are embedded in the skin of the scrotum, the function of which is impaired when squeezed the testicle. As for the penis, being in a compressed state throughout the day (and some young men and go to bed in swimming trunks), he gradually loses his internal tone, as there is stagnation of blood in the deep artery, passing in the center of each cavernous body and in the deep dorsal vein, where blood flows from the cavernous bodies. But youth and health, we will continue quoting M. Schetinin, directly depend on the well-being of the sexual sphere. “When the flesh dies, morality wakes up!” One of the Great ones said jokingly. I want to add: “And with it a lot of sores!” After all, the activity of the endocrine, and, first of all, the sex glands provides good body resistance. Namely, a decrease in resilience and caused by disease. ”

And until the thunder strikes (in our case, prostatitis), none of the youth thinks about it seriously. But when that happens, then...

Under no circumstances should you swim and sunbathe with two pants on your body - shorts and underpants!

This is a double blow for men's pride. 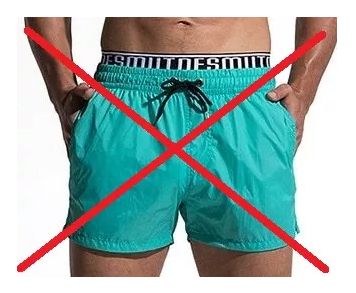