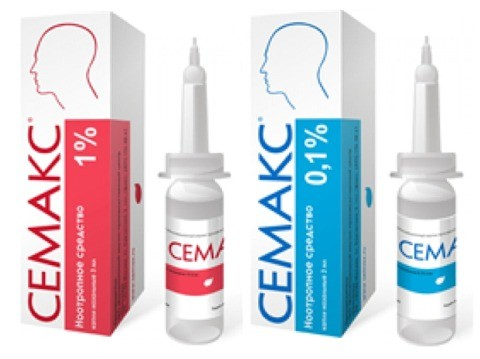 The unique preparation "Semax", which is a regulatory neuropeptide, has a complex stimulating and therapeutic effect on the brain and central nervous system. Semax has proven itself in the treatment of diseases of the nervous system and organs of vision. As a result of scientific research Semax was recognized as an effective tool for maintaining the activity of healthy people - "a vitamin for the brain." Semax is completely safe even for small children - the drug is included in the standard of specialized medical care for premature infants.

Semax has been successfully used to treat and prevent diseases and maintain healthy people since 1994. The drug was preclinical and clinical trials, its effectiveness and safety was confirmed by a large volume of scientific publications.

In the course of the research, it was shown that the long-term adverse effect of Semax can be a mild irritation of the nasal mucosa.

When using Semax, there is no:

Dependence, addiction and withdrawal syndrome;
Negative interaction with alcohol;
Suppression of cardiovascular, respiratory and excretory systems;
Interaction with other drugs.

The complete safety of Semax is due to its structure and mechanism of action. Semax is a neuropeptide, completely analogous to that formed in the human body, and in the process of metabolism it turns into amino acids, natural for the organism. All metabolic processes involving Semax are absolutely natural.
Interaction with other drugs

Semax is a peptide molecule, which very quickly enters the target cells 2-5 minutes after administration by intranasal route. This way of introducing the drug into the body practically completely excludes interaction with other medicinal products and their influence on each other.

Semax is officially included in Russia in the standard of medical care for retinopathy of prematurity. In clinical trials, Semax was used in children aged one month (Samsonova TV Russian Journal of Perinatology and Pediatrics, No. 5, 2013), and its safety and effectiveness were confirmed.

Individual hypersensitivity to the components of the drug. Children under 5 years. Pregnancy, lactation, acute mental conditions, disorders accompanied by anxiety, seizures in the anamnesis.
Semax for people's health

Allows people in old age to purposefully fight for the preservation of brain health to preserve intellectual capabilities until old age.

Age-related memory loss can be associated with a fairly large number of causes and / or diseases. Semax has a positive effect on nerve cells regardless of pathology and triggers the restoration of their functions.
Semax does not interact with alcohol, so the combination is acceptable. When Semax is taken, alcohol intoxication occurs later and at higher doses of alcohol, and Semax reduces the morning symptoms of alcohol intoxication.

"Semax 0.1%" is successfully used for the treatment of attention deficit hyperactivity disorder. Due to its effects, the drug helps to reduce the manifestations of attention deficit hyperactivity disorder, promotes the child's adaptation to school and to new mental stress, increases perseverance, positively influences the memorization of new material, reduces emotional lability.

Semax prevents and reduces the effects of craniocerebral trauma. Stimulates the restoration of damaged cells with a concussion or injury, stops the damaging chain of changes in the brain. Helps in the restoration of memory, speech and movement, prevents and reduces the long-term effects of head trauma, such as reduced vision, memory impairment, and others.

Semax restores processes in the brain that have been discontinued or severely impaired due to illness or external factors. Semax causes a natural synthesis of new regulatory compounds for the body, restoring damaged nerve cells and increasing the connections between them. It is used for initial and progressive disorders of the brain, astheno-neurotic disorders, craniocerebral trauma, anesthesia and neurosurgical operations.

"Semax 0.1%" raises concentration of attention, perseverance, assimilation of new information, resistance to stress, facilitating the learning process. Allows you to cope with the manifestations of attention deficit disorder, with hyperactivity and with disruption of the harmonious development of individual functions of higher nervous activity, leading to minimal cerebral dysfunction in children.

"Semax 0.1%" is effective in ophthalmology, since the structure of the tissues of the human eye is identical to the brain tissues. It is used for optic nerve atrophy and glaucoma.

The form of Semax helps him get into the nerve tissue of the brain in the shortest possible way. Semax is delivered directly to the neural cells of the brain with blood flow and along the olfactory nerves. In addition, the drug will not break down in the stomach and liver. An additional advantage is the ease of administration, since drops in the nose are more convenient than injections or tablets, which can be hard to swallow without water.

The use of Semax in childhood remains at the discretion of the doctor.

"Semax 1%" - a special dosage of the drug, created by scientists, developers to treat stroke. The concentration of active substance is 10 times greater than in Semax 0.1%.

The main effect of Semax is the increase of mental capacity. One-time reception for a one-time increase in efficiency is possible. To do this, "Semax 0.1%" must be dripped 3 drops in each nasal passage 2 times in the morning with an interval of 15 minutes, additionally, the 3rd dose of the drug is desirable in the afternoon.

Semax fate of the body

Under the action of the enzymes aminopeptidase peptide Semax disintegrates into its constituent parts - in particular the tetrapeptide Met-Glu-His-Phe tripeptide and Pro-Gly-Pro. The resulting conversion Semax molecules have their own therapeutic effect, as a catalyst for the body's natural processes. Later on the peptides are broken down into individual amino acids, which are included in the metabolic processes as absolutely natural to the body as its own.